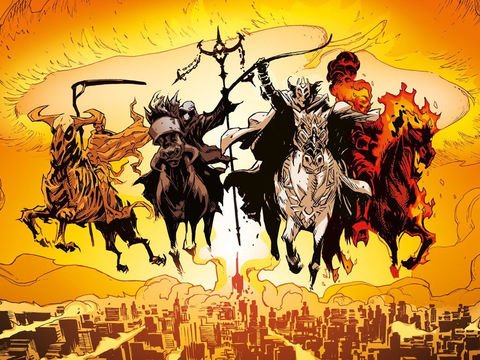 Where do authors get their ideas from?

I keep getting asked this, and you know what, I have absolutely no frickin idea. My first proper book (there were some before this, but let’s not dwell on those lol) was Cobra Z, which actually started as a screenplay. One day I woke up with the image of an aircraft carrier on the horizon, viewed from a boat out at sea.

What was the aircraft carrier doing there?

Maybe its part of a naval quarantine around the UK. But what would cause an island to be quarantined like that? The natural response to that was zombies.

From there a trilogy was born.

What this specific trilogy shows is how some authors (like me) write books. I’m what is tenderly known as a pantser. I start with no idea of where the story will end up. That sometimes works, but it also can result in the story taking a path that isn’t to some people’s liking (see the reviews of the third book of this trilogy for an example of that, although some kind reviewers have very kindly added spoilers just so you know) – https://www.amazon.com/gp/product/B07KJRS67P

Then there is my second major work, the Lazarus Strain Chronicles (LSC). https://www.amazon.com/gp/product/B07RWDM5CJ

Did I know where this was going when I started? Of course not. When it started, it was actually going to be about a serial killer, but for some reason zombies just appeared along with the clandestine organisation MI13.

I must give them their own series at some point 🙂

The LSC was where I started to get to grips with things, but again, it all just seemed to come out of nowhere. Some authors of old called this “tapping into the ether”, an inexplicable force of knowledge that exists in the universe. Others call it the infinite intelligence, like a cosmic wifi where all every combination of stories exists, only for certain minds to be able to tap into it and act as a filter and a means for those stories to be expressed so that sentient beings can sit down before a warm fire and lose themselves for a few hours.

Why the universe would want me to write a story about zombies is beyond me though.

Some of my books have had a modicum of a blueprint mind you. The Defiled was based loosely on the 7 plagues of the book of Revelation and sparked something in me that dwindled growing. That spark had to wait until I had written the LSC mind, but one day an idea just popped in there. Some people claim they get their ideas whilst taking a shower or mowing the lawn, but I can’t even remember the moment in this case.

A series of books based around a female religious assassin. Think gender-reversed Jack Reacher, but with demons.

And that brought you, dear reader, the 7 books Apocalypse Prophecies, book 7 of which will be released this month. That also had a modicum of a blueprint, the biblical book of Revelation and the 7 seals.

There are other notable pantsers, Stephen King being perhaps the most famous (and no, I don’t claim to be in the same pedigree as that fine fellow). What we tend to do is develop a character and put them in impossible situations. The character then determines what occurs. The story goes where it goes, and I don’t really have much control over it. So don’t blame me when a favourite character ends up being chopped up or impaled. Blame the universe or whatever cosmic deity you presently believe in.

What’s next you might ask. I have no idea, but something will pop along when it’s ready.