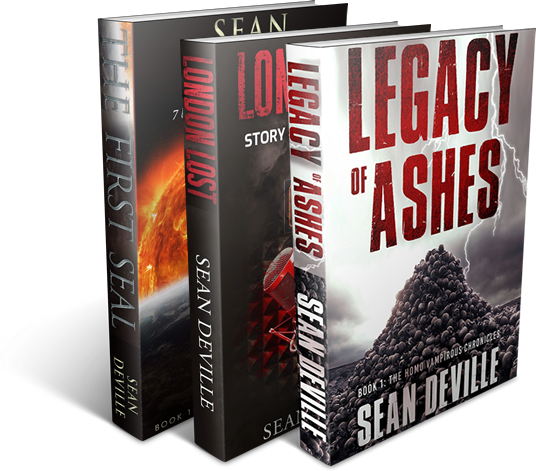 Would it confuse you to learn that, when I start writing a book, I have absolutely no idea of what is going to happen. There is a basic premise, and maybe the idea for a character or two, but I am not one to sit down and plot the whole structure out.

This is called pantsing (writing by the seat of your pants). As Stephen King basically puts it “I like to put characters in impossible situations, not knowing how they will cope” (not an exact quote, but you get the idea).

To me, this makes the story creation process enjoyable, as I am discovering what happens as I write. For some reason that I cannot explain, everything seems to fit into the plot, no matter how complex it gets. The pieces just slot, and I rarely have to go back and edit or rewrite earlier parts of the book.

Let’s revisit some of my books.

The premise for the Necropolis Trilogy (I know, I know, a lot of you didn’t like the ending) came from a radio news broadcast that discussed the UK government COBRA (which stands for Cabinet Briefing Office Room A) committee.

That led to the question:

How would the UK government react to a zombie outbreak?

In the Lazarus Chronicles, the premise was about a man made zombie virus escaping from a lab in Thailand.

That brought the question:

How quickly could it spread before the world became aware of it?

The Apocalypse Prophesise was a little different, in that there was actually something of a blueprint to follow, hence the mention of the biblical book of Revelation.  The idea that popped into my head was originally the thought of a female Jack Reacher style character who travelled the world hunting demons. This has been my most popular and perhaps my most controversial series to date. There appears to have been a lot of evangelical Christians who mistakenly thought it was some kind of Left Behind knockoff. If you ever wondered why I put warnings in the front of my books, it’s because of this.

And the question that was born?

What if there was a secret Order of religious assassins that protected the world from Hell?

In the Homo-Vampirous Chronicles, the idea for the series popped when I read something about how vaccine induced spike proteins could be used to target a virus at segments of the population.

For some reason, the idea of vampires popped into my head:

What if a race of vampires existed, only for them to be near extinction because the majority of human blood had become toxic?

I’m working on another book series, book one already complete. And here is the question:

What if there was a secret society that protected the realm (the UK and all its dependents) from enemies missed by the police and the security services? What if those enemies were primarily creatures that passed over from a parallel world, a place that was the basis for Hell in all human literature?

I’ll let you know closer to the release date when that book (and others in the series) is ready.